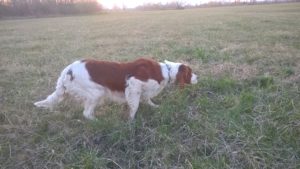 As with all the setters and the Pointer, the Irish red and white setter is classified as a gundog in the UK and is included in the sporting group in America and Canada. It is virtually identical in use and temperament to the related Irish Setter and its other setter cousins, the Gordon and English setters, but is more often found as a working gun dog.

The original purpose of the breed was to hunt gamebirds. In the UK, their quarry can be partridge or grouse, pheasant, ptarmigan, blackgame, snipe or woodcock as all these birds try to avoid predators by hiding rather than flying away. Overseas bird dogs are used to hunt quail, willow grouse, sand grouse, guinea fowl, sagehen, francolin.

Despite the breed’s early origins, it almost became extinct until dedicated breeders managed to revive interest and restore the Irish Red and White setter to a viable position. It is still in a vulnerable position but has gained recognition from all major kennel clubs. 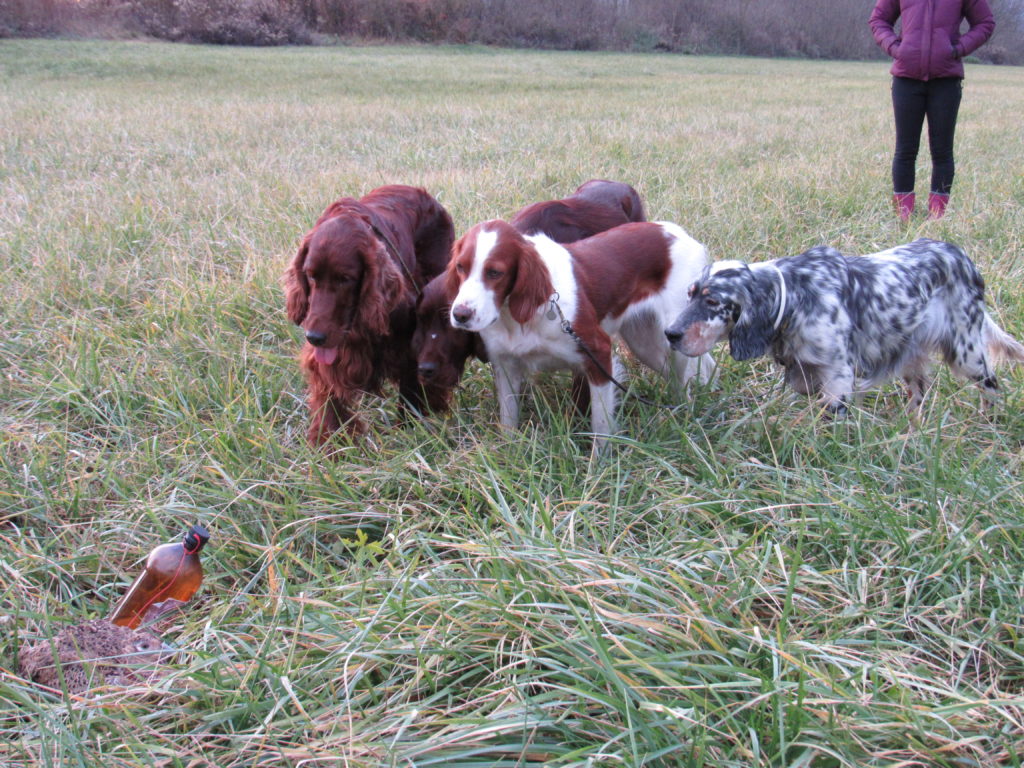 ‘Setting dogges’ – an ancient term for setters, were developed to indicate the whereabouts of game birds and a dog would have been used for this in Roman times. The dog would find the location of the game birds by scenting the air; either freeze in a position standing or crouching down then slowly creep forward on command to disturb the birds into flight. Once the birds were in flight the hunter who had been following the dog would release hawks to capture the birds in the air. When netting superseded the use of hawks, setting dogs would still be used to indicate the whereabouts of the birds but the hunter would come up behind the dog and throw a net over the birds. In the mid-1600s, guns became more readily available and shooting game birds became a popular pastime of the landed gentry. The basic work of setters was still to find and point to the location of game birds but it also had to be steady to shot.

An early Setter from around the 1850s.

By the 17th century ‘setting dogges’ had become established and the breeds as seen in the present day could be identified as Setters. Interbreeding of the different colours was still be taking place during this period but it gradually changed and sportsman (breeders) started to segregate matings to dogs adapted to the terrain it was required to work on.

Originally, setters in Ireland were mostly red, or the parti-colour red and white, or even nearly all white dogs. All were accepted as Irish Setters and were mated to each other.

As late as 1875 at a conformation show in Dublin, there were 66 entries in the Irish Setter classes; 23 of this entry were red and white. At a show in Cork the next year, in an entry of 96, there were 36 red and whites. This was when the fashion for solid coloured red setters began and the decline in red and white setter numbers continued. The popularity of the solid red Irish Setter in both America and Ireland gained strength as they attracted very high prices, all adding to the demise of the red and white almost to the point of extinction. A handful of breeders in remote parts of Ireland kept the breed alive.

A small number of breeders were active from 1775 to the end of the 19th century. The Rossmore family of County Monaghan in Ireland, had a strain of red and whites dating back to the mid 18th century and this line was preserved into the 20th century. The family still own many paintings of these dogs. During the breed’s history, red and white setters were sometimes referred to as Rossmore Setters. Other owners recorded at this time included Reverend Mahon of Castlegar, Yelverton O’Keefe, Maurice Nugent O’Connor and Miss Lidwell whose name was sometimes mis-spelt as Ledwich. The dogs from these strains were all particularly known for their working abilities. 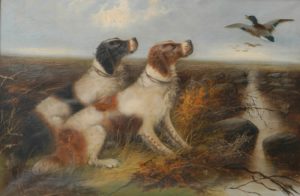 The function of setters is to find and locate game by quartering ground as it searches for the scent carried in the wind by birds such as grouse, partridge, pheasant or snipe. It is fast and wide-ranging. As it gallops in its quest to seek scent, its head is carried high. Once it locates the birds, it will freeze on point or “set” indicating to its handler where the birds are hiding. It may slightly crouch but its position will remain tense, immobile and rigid. The dog’s head will remain raised as it savours the airborne scent and it intently stares in the direction of where the birds are hiding. Its tail will be held level with its back. Setters literally show the hunters exactly where the birds are.

The breed is classified in the gundog group by the Kennel Club in the UK and in the sporting group by the American and Canadian Kennel Clubs. The Fédération Cynologique Internationale (FCI) classify the breed in Group 7, Pointing dogs.

The Irish Red and White setter still has an ingrained natural working ability, so when correctly trained and given the appropriate opportunity, will work well performing its original function.

They can take longer to train than other gun dogs, but once trained, they are loyal and reliable companions. They need firm, decisive, but not harsh, training.